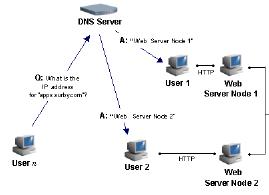 What is Load Balancer in Oracle Applications 11i ?
As name suggest its used to balance load on oracle applications, so lets say you initially sized (How to size server configuration in your apps 11i Instance during Implementation coming soon..) your server for 100 concurrent users & now additional 90 users started using your system , you can configure one more Application Tier node & distribute load of 190 users across two application tier node by configuring load balancer (Currently I am discussing only about Application Tier & once you are comfortable with Middle Tier I’ll discuss on database tier)
Why I need load balancer in Apps 11 ?
Is Increased load only reason for introducing load balancer in Apps 11i , No not at all . There are other reasons as well like (These are more advanced reasons & if you don’t understand don’t worry read it for understanding purpose at this minute)
– You want to Hide Server Name so instead of users accessing it via http://hostname:port you want users to access by http://somefancyname.com use load balancer (I know you can do this by various other ways as well like reverse proxy, via dns ..)
– You want on some node only web server & some both form server & web server

and there can lot of other reason why you need load balancer (May be you want to put it in your CV that you know how to configure load balancer, I know this is stupid reason 🙂 )

What are different kind of load balancer ?
Session Persistent – These kind of load balancers assign request from a client to same Application Tier. so lets say user1 tried connecting applications via load balancer and LB sent that request to MT1 then in future LB will send requests from user1 always to MT1 for time being specified in session persistence duration parameter specified in LB configuration or till user logs out from Applications. This property is called as Stickness or sticky Bit

Other types of LB, I am not discussing here as these are not required at this minute

How to configure Load Balancer in Oracle Apps 11i ?
Coming in Next post…

Where to find documents to configure Load Balancer ?
Coming in Next post…

Thanks Atul. Waiting for more information on Load Balancer.

How to configure the Load Balancer ?

Waiting for the configuring the Load Balancer procedure.

Saradhi,
Configuring load balancer are in next post i.e. at

Can you please provide detail step or a pointer on how to configure a 2 node application tier using load balancer?

when you run rapid clone clone it will ask if you have load balancer select yes & enter name of load balancer URL , Clone will take care of this , Do let me know if this is enough else I will put in step by step doc

How to check CPU(Security Patch)level and ATG Patch level in apps 11i?

Jayraj,
For ATG you can use patchsets.sh listed in below link

For CPU patches you can query opatch -lsinventory if its database cpu patch .

You can now raise such doubts/questions in forum at http://teachmeoracle.com/forum

you are really doing great job here. Keep it up.

I need your advice on my server upgrade. Is it better to be on single node installation for 60 concurrent users? we are on Sun Fire V490 ( 2 cpu , 8GB memory)
Is it OK to go

Krishna,
In my opinion one node should be fine but if you are using too many self service applications , you might look for increasing memory …

Hi Murali,
Thanks a lot, I’ll try to put it in a day or two definately before 25-Dec

Hello Atul,
realy you had good work.
thank you

I am having issues configuring 10gAS nodes with LB(Cisco ACE).

Oracle docs says to ensure all LB configuration is done and both physcal nodes intract with LB.This is in place.

But while Installing Infra using LB (not Cold failover),I am having issues with 2nd tier confiuguration).

I am not sure,while installing 10gAS in LB,are we suppose to disable 2nd node and have LB and 1st node running for installing and vice versa.

Venkat,
Explain your architecture in detail tounderstand your issue..

What problem you are facing ?

Are you planning to use RAC ?